I am presently flying to Korea for Prepare the Way of the Lord 2019!  Considering the attention focused on Korea this past weekend, this large national gathering could not have come at a more strategic time.  We land in Seoul tomorrow (Wednesday) afternoon, minister Wednesday night and again on Thursday morning, and then fly home that afternoon.  We will spend more time in the air than on the ground, so please keep us in your prayers!

As I mentioned last week, the meeting we had in Rapid City with Dutch Sheets, Joe Donnell and Gabriel Medicine Eagle to kick off the Nine Reservations Prayer Journey on June 23 was life-changing.  That was when we presented the double portion tallit as a sign of the Lord’s desire to marry the land.  Historically, when the U.S. government separated the Lakota Sioux Indians onto nine separate reservations to punish their resistance and break their strength, the land was defiled.  Last week’s journey to visit each of these reservations was actually carrying out a prophetic directive I released in 2018.  Linda Heidler, one of the team members who spent this past week traveling across South Dakota to each of these nine reservations, shares some of what transpired:

In October of 2018, Chuck prophesied that Joe Donnell should take a team all of the 9 Lakota Sioux reservations to worship and prophesy on each of the reservations. He said that this would unlock the land and the people.  On June 23rd, a team from Glory of Zion left to join the team that would carry out this prophetic directive. When he sent us out on the 23rd, Chuck said that we were to break the three-fold cord of Poverty, Infirmity and Religion on each reservation to heal the fragmentation of the people.  At each reservation, we experienced resistance in time and place for the meetings, made it through on each reservation, and saw breakthrough in salvations, healing, deliverances and reconciliation.

The day before the trip started, there was a tornado in South Dakota over the Flandreau Reservation which rotated clockwise rather than counterclockwise.  Only one percent of tornados rotate this way.  We felt that it was a sign of a turnaround in the atmosphere in South Dakota.  On the last full day of the trip, another tornado popped up out of a single super cell storm over the Pine Ridge Reservation. It touched down and hovered in place for over 30 minutes.  We knew this was a sign that the breakthrough was completed.  It is interesting that Pine Ridge was the first reservation we visited, and Flandreau was the last reservation on the trip.  The first and last, the Alpha and Omega, reservations both had unusual tornados. We felt like these tornados set God’s seal from beginning to end over this Firstfruits journey.

Here is a news clip of the tornado that formed on the Pine Ridge Reservation – a tornado that could be seen for miles! 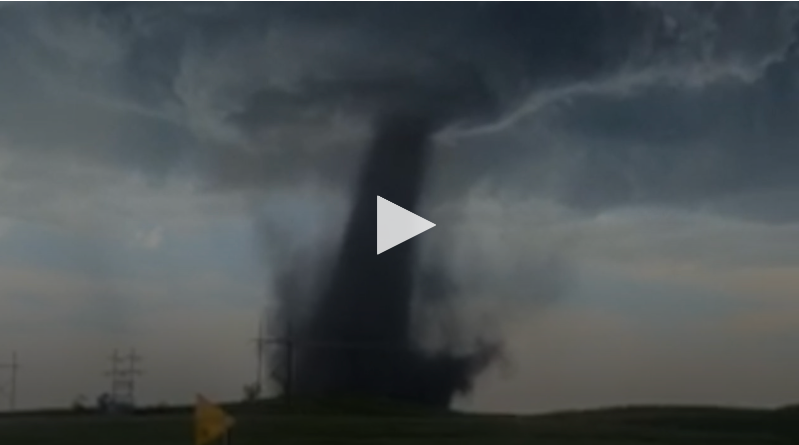 Join us in declaring that God is indeed marrying the land and causing breakthrough to begin in our First Nations as well as this nation.